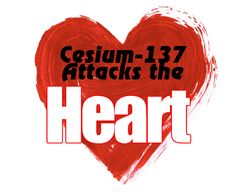 It’s a well-known fact that Chernobyl Catastrophe has left indelible mark not only in people’s memory but, unfortunately, in people’s health also. 30 years have passed since the Chernobyl disaster but we still continue to study the aftereffects and we fight with the dramatic aftermaths also. The worst thing is that even our future generations will be concerned with the problems that we had then  and have now.

A lot of harm has been done to our organism, but in this particular article we would like to touch upon the effect of radioactive cesium on the heart. Can you imagine that after the Chernobyl Catastrophe there was particle emission of cesium -137 in the amount of 1.0 m-curie? And the figures are dramatic! Cs-137 can enter our organism through the food that we eat, from the water that we drink. It can even penetrate while we are breathing. Mixed with the blood it is transformed to every part of the body. As soon as Cs -137 penetrates into our body, it is quickly absorbed by our muscles. And one important thing is that the more muscle active is the faster it absorbs radioactive cesium. Cesium easily gets into the heart muscles. Being quickly absorbed Cs- 137 has the access to the vital ferment processes. Which later turns into the cut back of ferment proceeding that works on heart muscle’s activity and prevents it from proper functioning. Next point is that it all causes changes in the structure of myocardial cells. In other words, the penetration of cesium into our body can increase the chances of a heart seizure.

To sum up the ideas mentioned above, radioactive cesium can bring on functional changes in the work of heart-vascular system, which is accompanied by myocardial injury and compartment of heart block. The more Cs-137 accumulates in the organism, the bigger the chances of heart seizure are. Also the accumulation of radioactive cesium in the heart muscles can provoke atherosclerotic cardiovascular disease and hypertension.